Its all black and...

Howdy there peeps!
Well its been all go here today... well I'd got my card for the Totally Gorjuss challenge all ready, well OK the glue was wet (as usual). Photos taken..... then..... well nothing. When I came to put the photos onto the computer I noticed that 'someone' had had a little chew of the camera lead! I wonder who it could be?..... 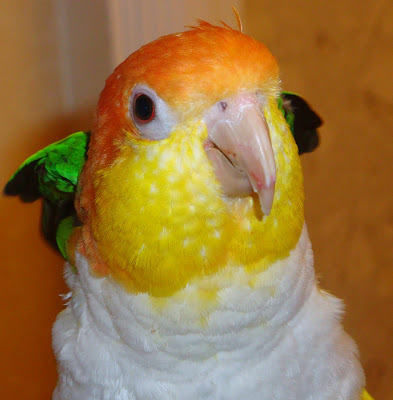 Now I won't name names. I mean that would be unfair wouldn't it? Well when said 'person' doesn't have their own blog to offer an explanation on? As I said I shan't name names... but that's not Harry in the photo! ;))
So anyway camera lead problem sorted (and now out of beaks way).
This week over at Totally Gorjuss the challenge is for black and... well I opted for black and pink. Well what else would I have chosen! This week our sponsor is Tando Creative They have the most gorgeous chipboard you could imagine! It takes paint and colour wonderfully. They have the most fantastic shapes, perfect for card making too.
So here's my entry for this week. I've used a Whoopsie-Daisy digi coloured with Copics, the Tando flourish corner was painted with acrylic paint and sprinkled with glitter while still wet. Seam binding from Creative Treasures, flowers from WOC. 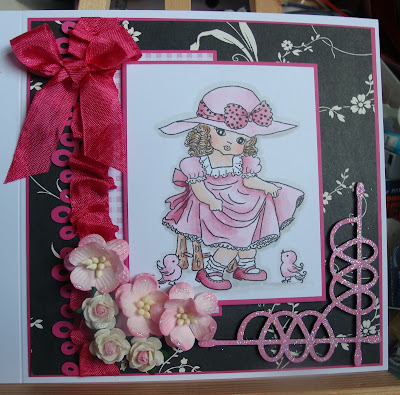 Now I'll put my hand up and admit to having another image coloured and all ready to go..... then I noticed all the others colours I'd used on it! Doh me! 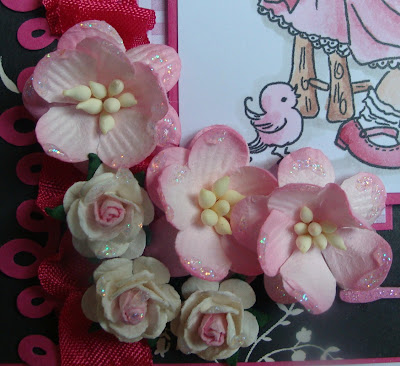 A wet Stickles close up!
Now this is the Tando chippie in its nekid state. I think it looks pretty good like this too! 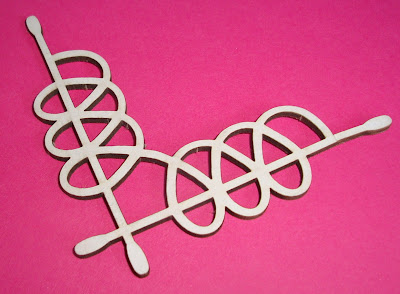 And here in its glittered glory! 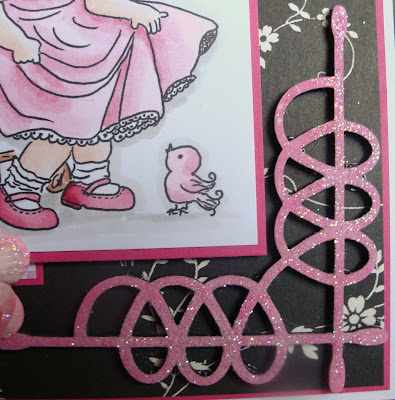 Oh and the arty shot! 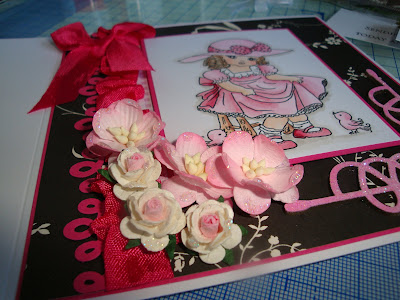 So what could you do with black and? The DT have made some fabby examples and yes there's an 'and' we're joined by Di Oliver who is the clever bod who comes up with the Tando ideas. So this weeks winner will get their selves some Tando chippie of their very own!
Posted by Net at 14:19 11 comments: 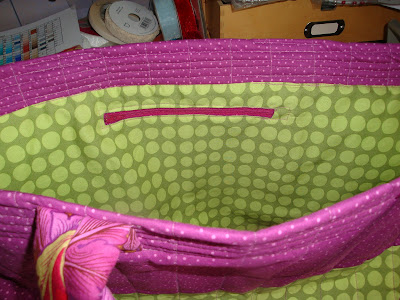 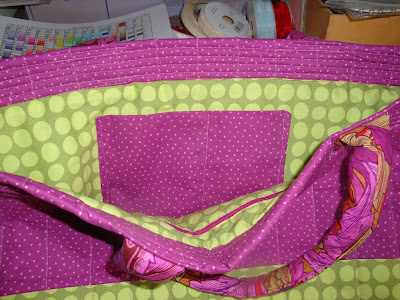 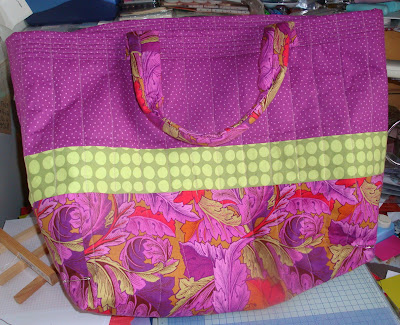 OK now I want to know who sent us this ruddy snow??? Now I know it was only an inch or so but snow is snow ~stamps foot~ and you all know how I feel about it! You may have heard one or two moans from me about it.... ;)) Fortunately its chucking it down with rain now.... heck that's how bad it is when I prefer rain to that white stuff!
Fortunately there's something much nicer to report over at Totally Gorjuss this week. This week the challenge is for you to 'check it out', which is that we'd like to see checks on your card. As usual The Gorjussettes have come up with some stunning samples. Karina's is a real WOW! I decided to make a man card (I don't know what came over me!) So seeing as I'd put my LOTV boy stamps in 'a safe place' wherever that might be! I remembered this Ian stamp from The Greeting Farm...I've had him un-inked for months..... well I know you all know how that is.
So he got inked and then he got Copic'd. Then of course you can't use flowers really can you? So then the button hunt ensued.... a bit of cussing and faffing followed and I found the buttons. I decided to use one of my new metal corners. I decided I didn't like it in gold on this card so I coloured it with a Copic! I got mine from e-crafts, they arrived super quick and they're the cheapest I've found anywhere! The papers are from Nikki Sivil and a spot of punching a la Martha and some Bo Bunny ribbon, a few more checks with a Pink Petticoat gingham. 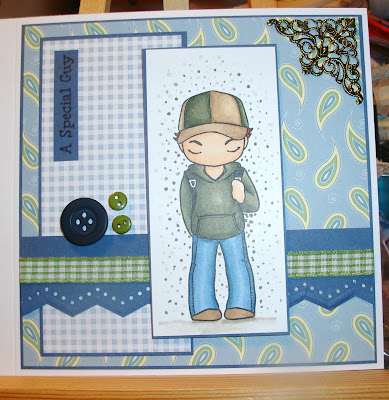 This card also fit the theme over at Claudia & Co who have a boy theme running this week so I've entered him in that.
A close up of the man himself! 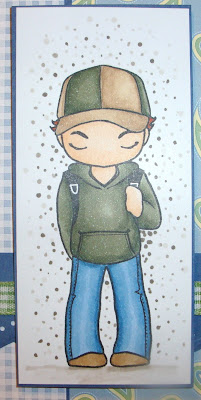 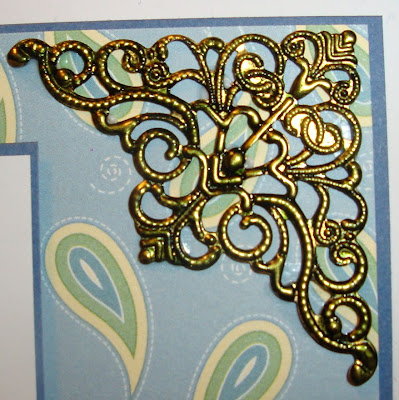 The corner was done with BG99 - I think its given it a vintagey sort of look.
Now for the best bit! A couple of photos of the girls!
Harry, just a little fluffed as she was relaxing and making the most cute teeny tiny cheeps. 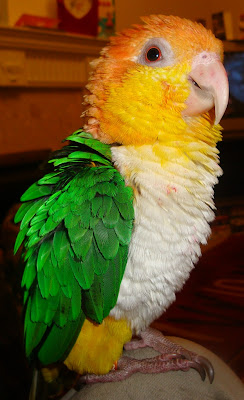 Tinker looking just like butter wouldn't melt in that beak! Do you think she looks like she's smiling? Can you see the wonky wing feather? She removed it right after this! It was a loose one ready to come out. 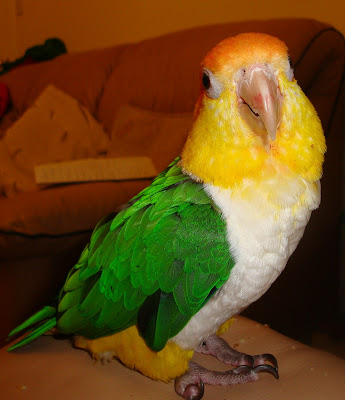 Now at the moment my favourite, well one of them, is in season - cherries! I love them. So do the girls! So here they are having a bit of fun in the cherry bowl! I'd put them some pieces of cherry in and they like playing with the stones! they don't have make their faces dirty though!
Posted by Net at 15:47 10 comments:

~sniff sniff~ Anyone want a cold? Please??? The OM had a cold, now he doesn't and I do! How kind of him to pass it on.... I don't think! The other amazing thing was I felt OK then sneezed solidly for about 10 minutes blew my nose a thousand times and that was it I had cold. Just like that. Up to the sneezing starting I'd felt absolutely fine....Bizarre huh? I can't ever remember having and 'instant cold' before. Shame they don't ever go as quickly isn't it? I'm hoping it doesn't go the way of my last cold so I'm trying to behave myself a bit more this time.
So (me late again) another challenge over at Totally Gorjuss, this time its LOVE, well it is that time of year again. This week we're sponsored by Crafter Companion (they've new stamps in!) Stampotique also have love as their theme too - I wonder if its a special time of year? ;)) So I've entered this over there too.
Anyway I used my fave new Tilda again. I decided to colour her in grey and add a little pink to the hearts.... then pink kind of took over.... But I like pink and grey! The background paper is a Magnolia one, now because its cut from a brand new sheet ~gasps~ there was a white border on two sides... now I could have cut it off but then I wouldn't get 4 pieces out of it... so out came the Distress Crackle paint! A quick swipe round with that and the sides are nicely evened out. Some more of that fabby Handy Hippo card (check out the colours! They're lush) for matting and borders, a squirt of glimmer mist to the flowers..... 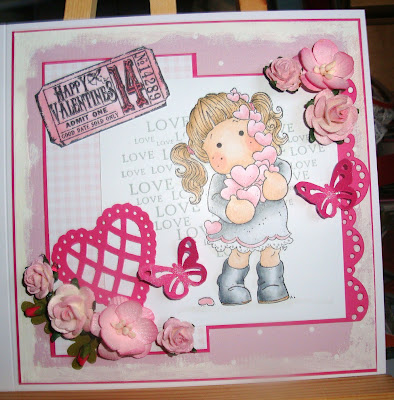 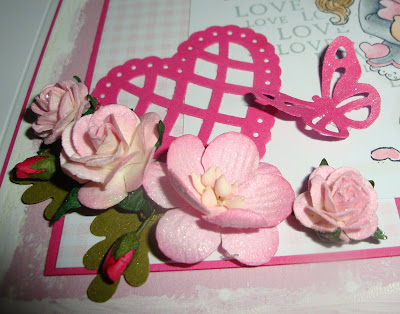 Now if you look closely and screw your eyes up and get your nose about an inch from the screen you make out the glimmer on the flowers and butterfly.... oh hang on that's just me without my glasses on! 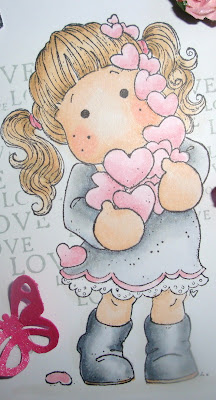 The post is an accident! I haven't had one.
I was chatting to a couple of friends on-line and I mentioned my new dress.... I popped a photo here of it and was going to delete it. Heck I didn't want to frighten anyone ;O)) Anyway a comment slipped in so I left it.

Oh and a photo of the flowers the OM sent me for my birthday - the lily has opened now and it smells beautiful! 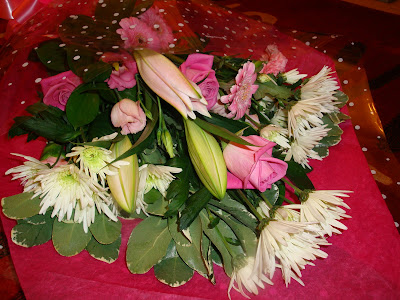 Afternoon! I almost said morning, but it feels like it to me as I've not ventured outside the house as yet! Not even had the door open ;))
Just a quickie for now with my card for a double. This week over at Totally Gorjuss its a nice easy sketch - drawn by me therefore its got to be easy! It also fits in with the new 'anything goes' challenge over at Just Magnolia and hAnglar and sTanglar challenge too. (Its not only me that gets confused where the capital letters goes it it? lol) So I inked up this sweet new Tilda - she's got her arms full of hearts! I'm quite pleased with how she turned out. 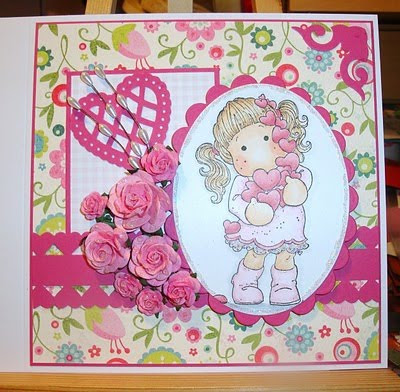 The papers are some My Minds Eye 'Quite Contrary' and I've almost none left! What will I do when they've all gone? I love them! They seem to go with so many other colours. The bright pink backing card is fantastic - that's from Handy Hippo, its lovely and smooth, sturdy without being too thick. It punched beautifully with my Martha Stewart punches too. Even with the latticed heart one which is a good test. So that gets a BIG thumbs up from me. There's some beautiful colours too - trust me you NEED some! I've sometimes used paper to matt with but I do prefer card.
So there you have it - the card, this week Totally Gorjuss is sponsored by Joanna Sheen ;)) remember you got to be in it to win it!
So a couple or three pics of some my little girlies!
Now little Tinker is still a bit too keen to get to 'see' me! Luckily Big L was on hand! She actually looks sweet with her little feet dangling! Looks can be deceptive though, little bugger wriggled out and managed a quick chomp! 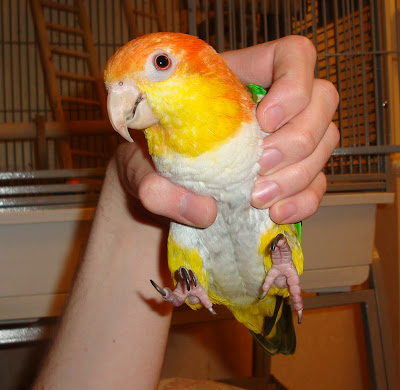 After a while in 'time out' that is back in the cage she behaved herself and settled down for a good preen. 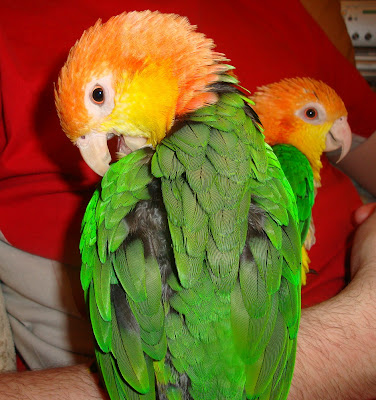 When you look at the girls wing people often thing they're 'just green'. However on the edge of their primary flight feathers, thats the biggest ones, they're actually a beautiful bluey turquoisey sort of colour.
Harry is preening, they spend ages preening! Because she's fluffed her feathers out you can see it. 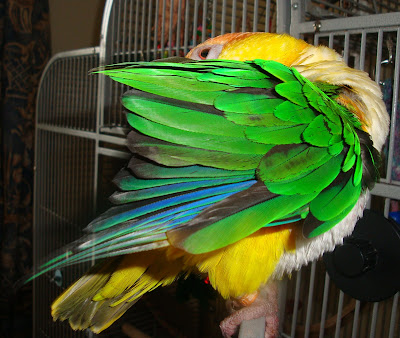