Look what I've made!

Heck I'm back again!  Oh and we've still got snow... and more forecast apparently too.  Though according to the weather forecast at the weekend its going to be heavy rain!  Fantastic huh?

Anyway while I've been (not) busy sat on my backside doing not much at all I've been thinking about sewing... I've not done any for ages for a couple of reasons - lack of time and when my sewing class did the dirty... well I've not done any.  So I finally got the machine out!

Now I'd had an idea in my head, which is scary because then I'd got to figure out how to get this great idea from my head and make it work!  So after some cutting, sewing and a little bit of fiddling I was done.

A different angle?  Any more guesses? 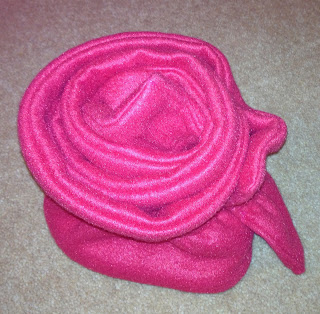 OK I'll unravel it a bit?
Now do you know?

Did you guess?  Its a scarfy neck snuggly thing!  It just snuggles round your neck and keeps you toasty warm.  I'm quite pleased as this was my first go! 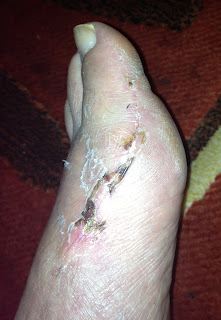 Yup its as sore as it looks! 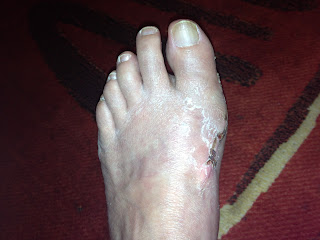 Not too swollen today because I've been good and sat down..... boring!  But I have to do as I'm told or I'll ruin the work I've had done.  Its too painful to have it done again!

So stay dry folks and warm, and I promise no more gross you out photos!
Posted by Net at 23:53 7 comments:

Oh my gawd! How much flipping snow are we getting!!!  Currently my garden is covered in about 8 inches of it!  Which centimeters for you metric types is a lot!  I mean its a lot too much for me.

My poor outside birdies are scoffing as much food as we give them.  Poor things :(

So here's my latest card for the challenge at Totally Gorjuss  This week the challenge is KISS which as we all know is Keep It Simple Silly/Stupid....  One of my most (un)favourite themes!  I mean all that unadorned space!!! EEK!  I mean what kind of muppet picked that as a theme.... Oh yes that'll be me then.... you know when you have a brilliant idea to challenge yourself?  Sounds so good when you first type is.... then at some stage you actually have to do something about it!  Then its not a clever idea at all. 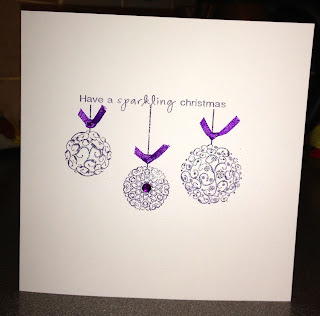 So my idea is shamelessly lifted from Marion Emberson I also used her stamps too.  Stamp, swish of glitter, bit of ribbon, bling and done!  pop over and check out the other cards, they're much better than mine!

Now as you know (and if not why not???)  We have a couple of calm, well behaved, placid parrots.... OK they're lunatic nutter parrots!  Now obviously my crafting has rubbed off on them.  Now they've not taken up card making or sewing.  No they've decided on wood carving.  Look what the little buggers have done to one of my doors! 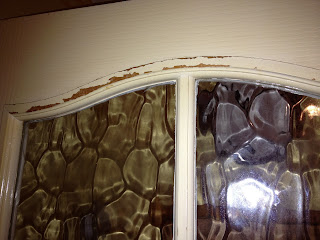 Just to be fair they've done the other side to match too!  This is when they were being watched, in the loosest sense of the word obviously, by the OM.

Here's little Polly.  Now this isn't her cage she's just been for a visit to Tinkers cage to see if there was anything different in there to hers! 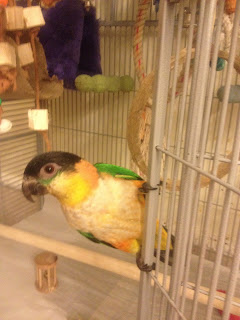 You know the bit I said about lunatic? Well Tinker has a bit of a thing for tubes....any tubes... he sticks his head in them and growls! And he'll do it for ages! 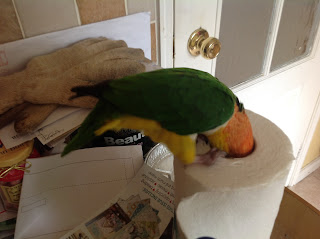 So an easy way to keep him occupied!

Hi there reader.... well if anyone is reading that is....  Mind you if not I can rabbit away to myself all day!  Its always a result as of course I always agree with myself!

Now while I was away on my Blogidays, which isn't where you blog everyday its where you don't.... The cause of this is while we were away on holiday my beautiful girl Harry was taken away to Rainbow Bridge.  I was devastated and to be honest it took blogging right out of my system and then the habit kind of went away too.  I think I felt worse (if that's possible) because we were on holiday at the time and kind of felt like I'd abandoned her.  Even though she was as fit as a fiddle seemingly when we went.  I have to say my friend who looks after them is brilliant and it was just one of those things and was connected to her previous illness.  When they say parrots hide illnesses they sure do!  So a couple of photos of my beautiful girl who I miss every day. 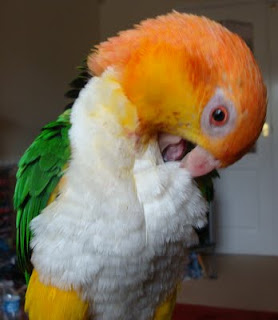 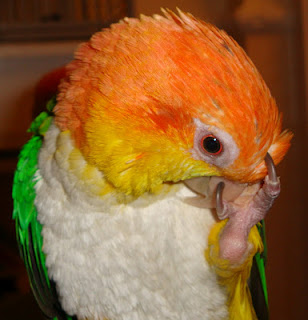 Then a couple of months later Jasper's illness worsened and I had to take him to be put to sleep.  A horrible task but necessary. 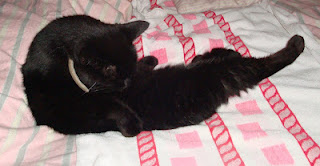 So blogging went right on the back back burner.

So we were left with Tinker who'd always had a friend.  So decided to get another little girlie to keep 'her' company.   So we got a little girlie to do just that.  So here's Polly.  She weighs a tiny 129 grammes.  Bigger than when we got her by a whole 5 grammes! 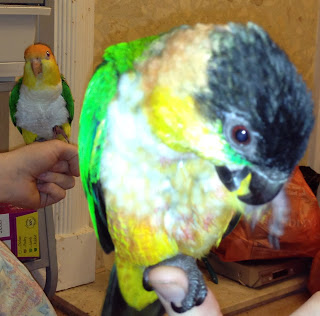 And yes she's as cheeky as she looks!  Polly is still a caique but a black headed one. 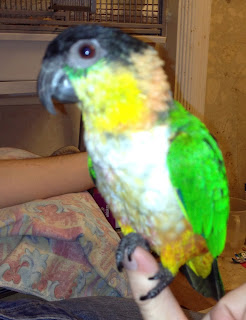 Oh and we'd had her two days when the vet phoned with more results of Tinkers tests after we lost Harry.  Tinker is a boy!  So we've got a boy and a girl!   Which we had with Harry obviously but we were assured by the man who sold us Tinker that he was a she!  I think the bugger just told us what we wanted to hear.   But they like each other and are in separate cages till she's more grown up.

Polly is a sweetheart and behaves very like Harry - maybe its a hen thing?  Or perhaps just a bit of a Mummy's girl...

Oh she likes doing may hair just like Harry did.  Now if Tinker were to this I'd be screaming - he'd be taking lumps of flesh out!

OK I hope no one gets hurt!  I'm not going to get violent or anything!  I just don't want you to hurt yourselves when you faint because I've actually posted something!  I did threaten promise to didn't I?  So I'd better fulfil that part of the bargain! 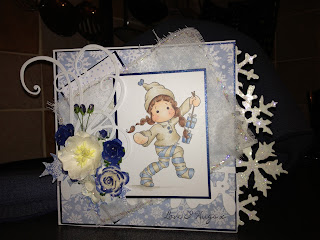 Now this here (tiny for some reason) specimen is my card for the new challenge at Totally Gorjuss  This week the challenge is 'spots', yes they are there!  You may have to squint to spot them....

Oh and the eagle eyed among you will notice there's none of my usual desk crap behind the card!  No this is kitchen worktop crap instead!  Can't get into the craft tip at the moment due to poorly foot.... I'll bore you with that another time.