News about Harry! and WOYWWD

Hiya Bloggettes! A surprise appearance from me - less than a week eh? How lucky for you :)) Well as usual its been a trifle busy here at Caique Momma Towers! As well as all the baking and golf a dramatic weekend.

The lovely Harry was poorly and had to go into hospital! Oh my what a time it was. Poor baby was being sick and with her only being a little chickie would soon have become dehydrated. It took me ages to find an Avian vet! Our normal one was on his weekend off (typical) and every other one I tried had a locum service in! Eventually I managed to find one - the other side of Loughborough! Hardly on the doorstep. So off we rushed - every plonker this side of London was on the M1 south at the same time as us! GRRRRR!!! I mean why drive in the middle lane when you aren't going to overtake anything for a mile? Anyway the long and short is she's been, stayed the weekend and is now back home! Oh she's come home a touch bitey! I'm hoping its not the dreaded hormones :0(( I'm hoping she's just a bit ticked off after her trip.

So restricted view of my WOYWDW! Why is is restricted? Well..... now this might sound like I'm a numpty.... as if! I took a photo of my desk with a little tease of something behind the card. Yes Bloggettes I was trying to tease you! But if you recall I've suddenly learnt how to crop my photos? So I cropped them..... only thing is these were ones I wasn't supposed to crop! Doh me eh? So add in being a bit knackered I couldn't drag myself back upstairs! Or if you prefer idle moo! You'll be able to pop over to Julias to check out the clever peeps who've played properly ;))

Anyways I've made a (little) start on a few Chrimbly cards!

I got a small haul of new LOTV cuties - so I used the Father Christmas and Mr Snowman. Both Copic'd. 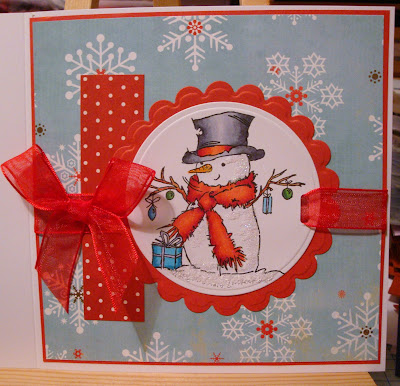 Mr Snowman has had a swich of Glamour dust and is sat on a bed of Twinklets snow, the paper is some of last years Bo Bunny. Now I know my photography skill are mint(!) but the paper is more turquoisey than blue. 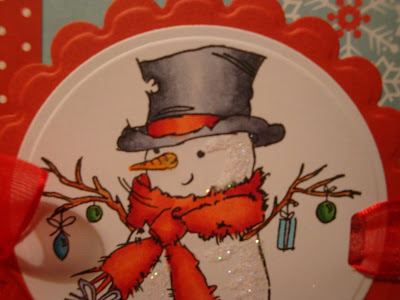 Now isn't this little Santa a cute little guy? The sentiment is from Stamps Away and was a real bargain buy. Flowers from Wild Orchid. 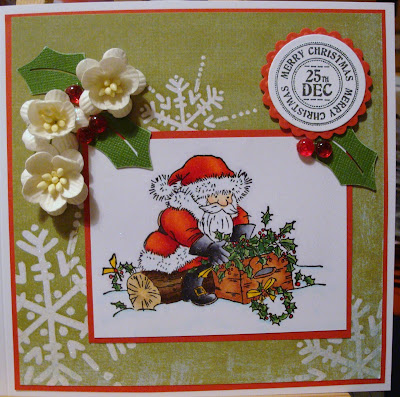 Before I stuck him down I sprayed the image with some Crafters Companion Iridescent Glitter Spray - it looks fab! A subtle sparkly effect. Again you can't see it on my photo! 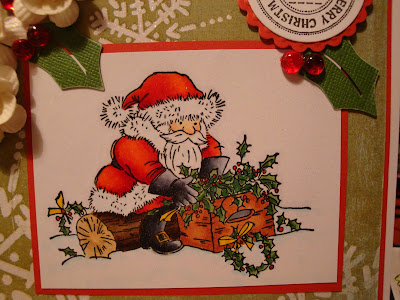 You'll never guess what happened! The time thief has been here gain - I mean how else could that explain where a whole week has gone!

I do hope you don't feel that I've abandoned you - I've not even had time for a spot of blog hopping :(( I seem to have spent the entire week in the kitchen cooking. Thankfully a bit more comfortable with the cooler temperatures. However I've got a couple of good fans so hot weather isn't a trauma!

So I thought I'd show you my card for this weeks challenge over at Totally Gorjuss This week the theme is 'thinking of you'. Now I know some people see this as a sympathy card theme. To me its often used as a 'get well soon' alternative. Or simply to let someone know that you're thinking about them.

Seeing as I favour the 'get well' message I inked up this little sweetie from Lili of the Valley She's administering a little medicine to her poorly teddy! I don't think teddy looks too keen on the idea of medicine though do you? 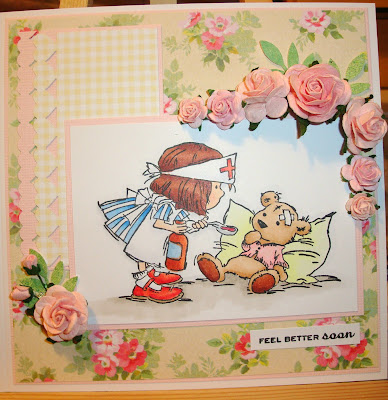 I've used Paper Mania 'Rose garden papers as I discovered these were the only ones that went with the colours I done! The downside of colouring first. In my defence I coloured while waiting for my car to have its MOT! The flowers of course from Wild Orchid Crafts and the sentiment from a set from QVC. 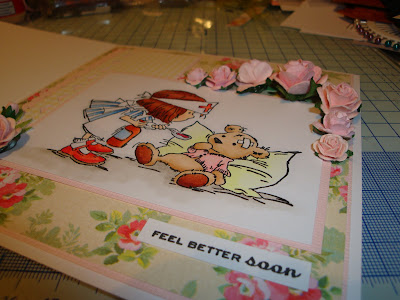 So pop over and check out what the Gorjussettes have made. This week we're sponsored by Crafters Companion - a £10 spend in their shop - good huh?
Posted by Net at 01:33 12 comments:

Well I hope its going to be sunny really. I can hardly put sunny Saturday at 12.30am can I? Well I suppose I could if I wanted..... Heck I'm not retyping it! So sultry its stays!

So are you all enjoying the sun? That's a yes from me!

So here's my card for this weeks challenge over at Totally Gorjuss We want to see water on your entry. A bit of a pun! Anyway I decided on this sweet little guy from LOTV Isn't he sweet? I Copic'd him (of course), a bit of Pink Petticoat Gingham - they are such super value! Some paper from my bit box and a sentiment with no name! lol 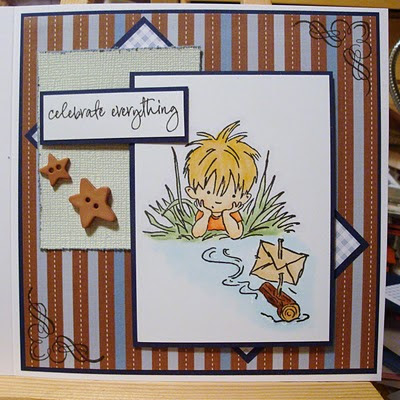 Pop over to TG and check out the Gorjussettes inspiration - you can also meet the two new Gorjussettes too.
Posted by Net at 00:14 7 comments:

The daughter of a good blogging buddy of mine (the lovely Gez) has gone on a fabulous trip to China! She's gone to have a sort of crash course in Chinese. How super is that? So I thought I'd make her a card to wish her luck.

Now I've had this stamp for years and its never seen a smear of ink ~blushes~ but how perfect was it for this project? I coloured it with Copics and added shading to the torn edges. Now for me to just rip the edges was hard! I'm usually a clean cut kind of gal ;)) I added a few cherry blossoms which are an oriental type flower (aren't they??) a bit of punching a la Martha, papers by DCWV, bit of ribbon. Oh and a couple of little punched pink butterflies to just lift it a bit. 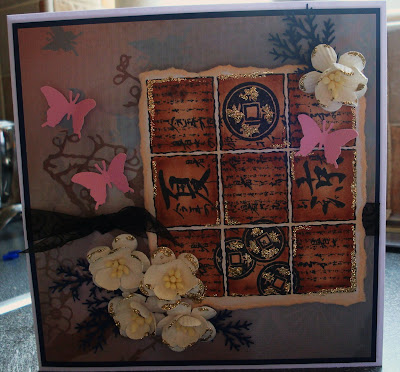 Oh a touch of gold Stickles for a spot of pizzazz! Now I know nothing about Chinese.... other than what I've gleaned from my local takeaway, I don't think know the numbers of my favourite dishes counts does it? I'm hoping the writing isn't upside down! I'm sure Rae-Rae will tell me when she comes back!
Posted by Net at 00:08 13 comments:

OK who stole the whole week? AGAIN! I mean come on someone must know surely? Either that or those flaming Aliens came and whisked me away.... mind you I've read about the 'things' Aliens are supposed to do and I'm sure I'd remember anything like that happening to me! I mean have you read of the things they do? Naturally I'm unable to repeat such things here.... Or could the lack of blogging have something to do with the amount of cooking I've done this week? I reckon I've used around 170 eggs! Enough said I think that discounts the Alien theory ;))

Now tonight I was sprawled out watching TV when I heard a bump! I knew what it was straight away, a bird flying into one of the windows! I rushed outside expecting to find a dead bird. However on one of the chairs on the patio was this little blackbird baby! He's not long out of the nest and the poor baby was stunned :(( At one point I thought he was going to die in my hands! I scooped him up and took him indoors.... but what did I do with him? I'd got some tonic left over from when Harry was poorly - its like a boost kind of thing - so I made some up in warm water and fed him some. Which bless his little heart seemed to perk him up. I took him back into the garden.. As soon as we got outside he started calling for his Daddy! Daddy answered by dive-bombing me! Baby gave me a good peck and was placed in the bushes and fingers crossed he's OK.

Look at him having a wee drink! Sweet huh? 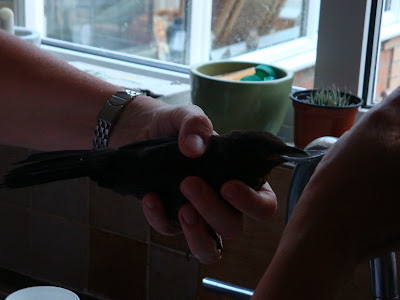 So over at Totally Gorjuss we've just got a new challenge up. This weeks its a nice easy sketch. I drew it which explains why its easy! I've used this sweet little mermaid from Sweet Pea stamps. Coloured of course with my favourite Copics. A few flowers and a couple of pins and a bit of lace. I think she's rather pretty, I love her little seahorses. I edged round the flower with Copics to tie it in to the card a bit more. 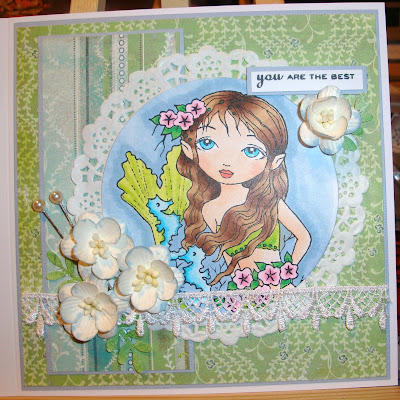 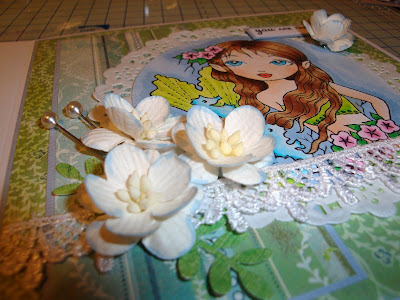 Now onto another point, our garden is currently birdie central. They're fed, watered and tended. The kitties, well Jasper any way, are on house arrest because of all the babies there are. So I'd put a dish out with water in for them to have a drink. Now on my travels I saw this cute bird bath. I mean its got birds on it so I had to have it.

Mr Pigeon who lives with Mrs Pigeon and their two chickies in the conifers rather likes it! Do you think he looks rather relaxed or what?


Oh and what about the dove laying on the grass??? Mr Pigeon had 15 minutes in the water! Mr Dove laid on the lawn for over 30 minutes. he then went on the feeder for some lunch and away he went!
Posted by Net at 00:14 8 comments: