Oh my BRRRRRR!!! Yup we have tons and tons of that nasty white stuff! And from what I've seen on TV so does most of the country too. I suppose compared with some parts of the country our 8" is nothing really.... Well for me though that's 8" too much! Needless to say the OM and me's cars are staying on the drive. Well no choice really I don't think they'd shift an inch! Now I had a very lucky thing yesterday, I went and bought myself a pair of waterproof boots! Yup I managed to buy them BEFORE it snowed. Usually I end up getting them after its gone ready for the next time which doesn't happen ;)) So anyway I have these dinky little fur-lined, zip fronted.... yes I said zip fronted, at which point the Big L asked me when I was getting my shopping trolley as these were clearly 'old lady' boots. Well 'old lady' boots they may be but today my feet were dry and toasty warm.
Now while I was out I took a few photos of 'my' snow - which incidentally is available for anyone who wants it.
Pyracantha buried in snow! We also have an orange berried one, now the birds have eaten all the orange ones first. I wonder if they taste different? But then again one of my neighbours has an orange berried one and the birds haven't touched it.... mine is obviously much tastier ;)) 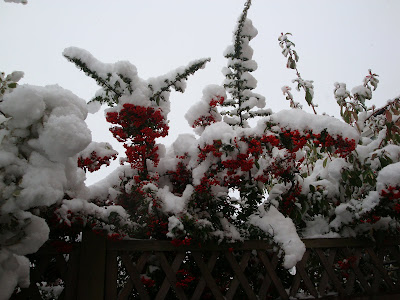 Now yes I will concede the snow looks quite pretty.... but look at it piled up on the top of my bird feeders! 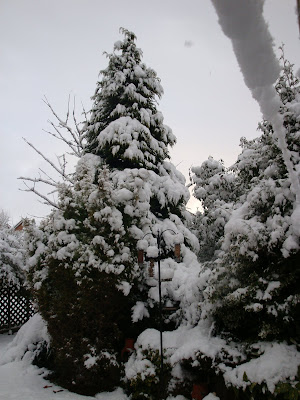 A little look through the wood near us. 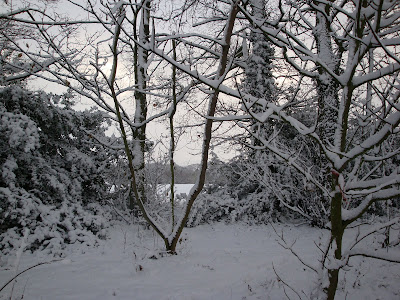 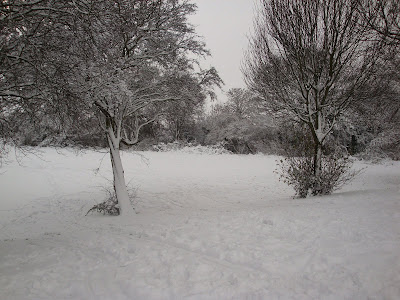 Now a different sort of card for me. Where's the stamped and coloured image I hear you cry? I can't hear you..... I decided to try something really different. I think it kind of works too. Plus it was really really quick and it only used scraps of paper which I'd probably have ended up binning. A little punching a la Martha Stewart and a ribbon et Voilà! 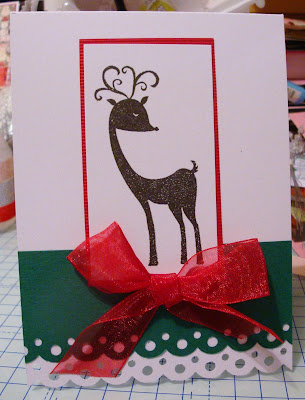 I quite like it.... but its very different from my usual cards.
Now I 'd like to thanks those of you who've been asking after my Harry. Oh she has been a poorly chickie, especially after her new medicine last week. I thought we were going to loose her! She reacted awfully to it. So that went straight in the bin! Well she's perked up a bit since then and is just being sick occasionally. So I took a little video of her getting stuck into her seeds. Oh Tinker appears and she's playing 'kill the evil bell' I'm not sure what the 'evil bell' has ever done to Tinker.... but boy does it pay for it!
So here's Harry bum in air.....
I mean how else would you eat your seeds?
Posted by Net at 19:01

Aw....she still doesn't look well yet. Hope she is better soon, Net.At least she is eating some seeds.

Yes, quite a lot of the white stuff Net! I like your card, that style suits you.

Wow you ain't half greedy with the white stuff!

Hope Harry continues to improve each day. Lovely to see them both.xx

What a gorgeous card Net.

Lovely photos of the snow, but 'snow joke any more! I can't believe how much we've now had. What a Tinker!! Hope Harry continues to improve. Love the card - as you say, different for you, but it works well - you should do more in that style x

Well, it might be a bit different to your usual but it looks fab and fast is always good!

Lovely snowy pics my lovely!!! We have no snow here so shall I make up the spare bed?????

I love that card!!!! Not your usual style but it looks wonderful.

Awe poor Harry still looks under the weather but she is eating so that has to be good doesn't it?