~cough cough cough~ I'm a poorly bunny here at CM towers folks! I've got lurgy pretty bad! Well before I get onto lurgy details let me tell you about the secret I did for my OM. Well last week he had his birthday.... I planned him a secret party! Well it stayed a secret and it was fab! The keeping it secret was so hard! Especially when folks ignore invites not to phone me... or bother to answer RSVPs! But despite all that it was marvellous!
Oh now to bore you with my lurgy, as my Doc puts it I have a touch of pneumonia! Yipes how can you have a touch of bloody pneumonia? Anyway I'm armed with enough antibiotics to stop an elephant, inhalers and all sorts of malarkey I almost needed a mortgage in the chemist to pay for it. When I croaked 'what?????' the assistant very kindly repeated the amount loudly as she thought I hadn't heard her. I had I was just in a state of bloody shock! When she handed me my sack of drugs several people stepped back as if I was going to give them what I obviously had bad as proved by the sack of expensive medication I had. I'm now waiting for them to kick in....
So enough of my moaning....
While I was blog shopping the other day I came across a blog with a really cute gift holder made from a paper bag. Now me being me I can't remember who's blog it was! Sorry! (natural blonde remember)
So anyway I got a sudden flash of mojo-itis! and I HAD to make one! I knew I had some bags..... well when I eventually found it (turns out I only had one left!) So anyways I dug through my Magnolia papers and stamps and off I went....
So this is the front 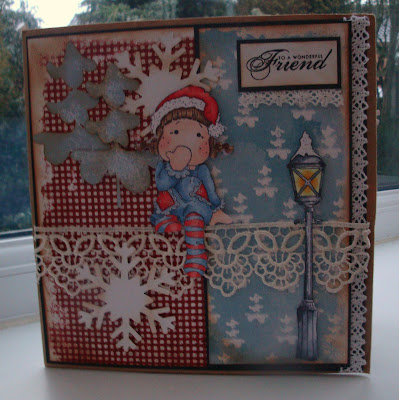 After its folded in half this is the middle section 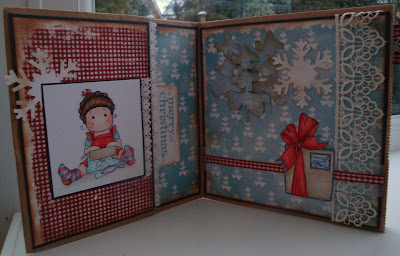 On the right is a pocket where you put your gift - ideally something flattish! 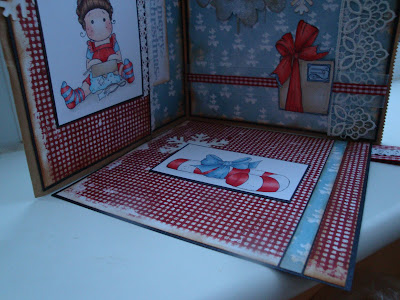 This is the card that slides into the pocket, I attached the gift to the back with DST 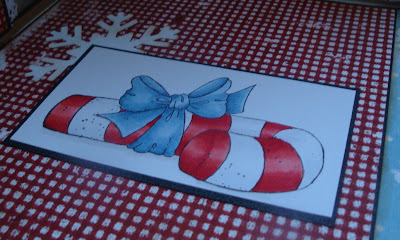 I even decorated the back of the bag too! 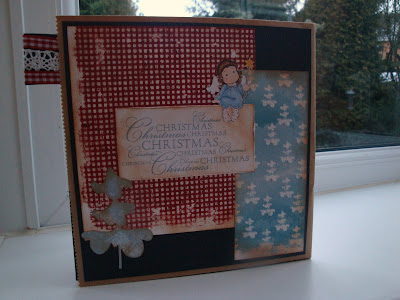 Now it looks quite a bit but I only had to cut two pieces of 12 x 12 paper, and there's scraps left over too. Naturally I did the colouring with my trusty Copics. Obviously I added a spot of lace, ribbon, die cuts just because I could ;)) I actually rather liked it.... I hope the recipient does and if Royal Mail have done their stuff it should be there!
Over a 7kids college fund challenge blog its 'anything goes' so I think this nicely fits into that one. makes a change for to be able to enter a challenge just for the sake of it ;))
Now a couple of gratuitous chickie pics!
Here's that naughty little monkey Missy Tinker. 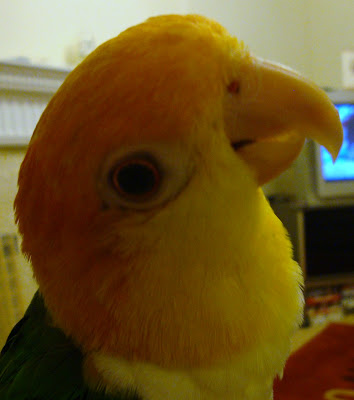 Who'd have thought that sweet little baby would chomp a lump out of Mummy's arm first chance she got?
Now I filled their water dish up.... the jusg obviously evoked a lot of attention and needed to be thoroughly investigated! 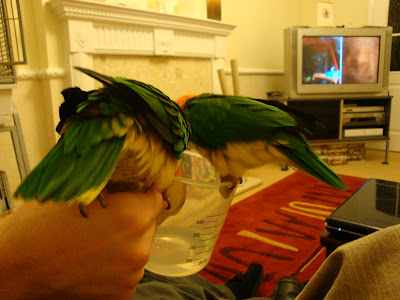 Oh Net, that sounds awful. I hope the ABs kick in soon and make you feel much better. Pneumonia is a painful thing. You take care and let the others do what is necessary to look after you!!!
Love the gift bag too.
Kath

Oh Net .. seems this dreaded lurgy is doing its rounds. I very much hope you will soon feel better .. xx
Carole x

What a gorgeous card,I love the images and your papers.

Oh Net, sending you HUGE furry get well wishes hunny! You already know that I adore your creation, so beautiful and a stunning work of art. Sending you, him, and the Tweets big Christmas wishes, loadsa love, Sxxx

Sending you warm hugs Net. I hope you will be better soon. My husband has it now. Man flu!!!!!!! All I can hear is grunts and groans. Women are much more quite when we are ill!
Love Sarah x

Awe Net....you MUST take care of yourself this weekend & do as little as possible! Get those two great men to do as much as you can stand!!!!

Now how did you create such loveliness out of ONE paper bag??? Its a stunning piece of work my lovely!!!!! I am loving the trees you have used on it...are they die cuts???

That bag is gorgeous and I do hope the recipient loves it. The papers are wonderful as is your colouring in.

Poor you Net. What a nasty lurgy you have right enough. Hope you feel well enough to have a lovely Christmas and all the best for 2011

What a fabulous card! You can tell a lot of thought went into it. Thanks so much for sharing with us at 7 Kids!!