Woohoo!!! Its official! Spring has sprung ;)) Hopefully the start of better weather and so far so good ~touches wood~ I had a discussion with someone over which day was the first day of spring. Easy its the 21st of March! Which happens to be the Big L's birthday. I remember when I had him there was about a foot of snow! Very spring like I don't think.
So a bit of news. I'm now on the DT for the Paper Temptress (fabulous name). I've always wanted to be a temptress of one kind or another! Its an American company oh and they also have ribbon! See two of my fetishes, er favourites! If you want to try one sheet of something then you can! So you have bits of lots of things without having huge packs which you'll never use. So that's my bit of news.
Over at Totally Gorjuss the latest challenge is up, well it was on Saturday actually but muppet brains here forgot to post on her own blog.... Anyway in celebration of Spring having sprung that's the challenge - Spring - easy peasy huh?
So this is my effort. I've used one of the fabby shaped cards from Which Crafts, the papers which are Nitwits also came from the lovely Paula. 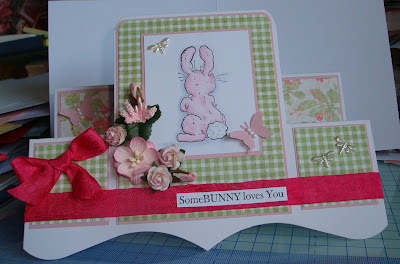 So there you go a little Magnolia bunny! Flowers from WOC, seam binding from Creative Treasures Teeny tiny pearl dragonflies are from The Hobby House

This also fits the challenge over at Just Magnolia and hAnglar sTanglar challenge blog. They've got a bingo challenge on where you choose 3 things in a row. I opted for gems, glowers and ribbon/lace. That's a great idea for a challenge - thanks girls.
The nobbly flower 'thing' was in my stash, I've no idea where I got them from. I do know though I've only a couple left! Yipes I'll have to try and get more as I quite like them. 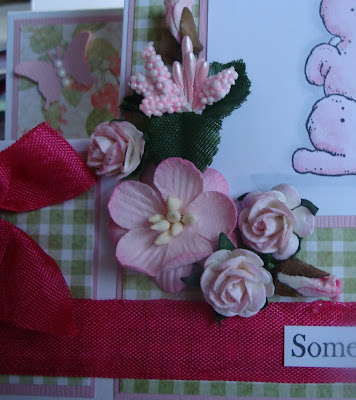 Now yesterday the OM was in charge of the two monkeys! He always maintains he keeps a very close eye on them and they're not allowed to get up to any mischief or get into anything they shouldn't..... Do you believe him? I certainly don't.
May I present the evidence? 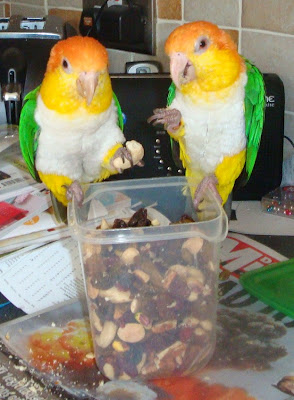 That tub of fruit and nuts was sealed up very nicely! Harry, who is on the right as you look at the photo. took the lid off and helped herself! Tinker being a girl who doesn't want to miss out joined her for a snack! So they had a lovely munch and then weren't interested in a nut to go back in the cage with!
Posted by Net at 20:56

Great shaped card Net and those birds are very naughty. Happy Birthday to Big L too

Love your card...and your birds are adorable....hello Annette...So happy to meet you.....and look forward to working with you on the Paper Temptress DT

Congrats on the new DT Net :-)

So much for Spring I was born on the 20th & Mum said it snowed whilst she was in the Nursing Home!! LOL

Naughty birds! So someone keeps a good eye on them eh? LOL