Brr! and as the title says Ouch!

Bizarre as usual eh? Well first the Brr! Well its 12c here folks, which for what is allegedly the middle of summer is about 20 degrees amiss in my book. Admittedly I like it hot but I think everyone would agree that for this time of year it really is rubbish! The heating was on again last night and I just know its going to be on again tonight too!

Now the Ouch bit.... well yours truly when head over apex in the garage the other day. As usual I was hurrying up... when aren't I? Well as I went in, down two steps, I tripped up over a brush which had fallen over nicely at mid shin height. So then I'm going through the air at about 500mph! Well it felt like it ;)) I realised I was going face first towards the corner of the tumble dryer.... somehow I managed to miss it with my face and opted to head-butt it instead. When I came round I was wedged between the tumble dryer and some shelves. Half an hour later I managed to get myself out! Yup I was shouting my head off.... OM was sat in the lounge watching TV.... So to say I have a few bumps and bruises is an understatement. Oh and the cracked ribs too.... So less dashing for me I reckon don't you?

Now in the middle of this another challenge went up at Totally Gorjuss this week its extra easy. mainly because I chose it and I love easy challenges! This week we're sponsored by Kenny K Kenny and Elena also provided the DT with images too. I chose this little cutie. I think she's fabulous! Actually this is the spitting image of me! In my dreams...... 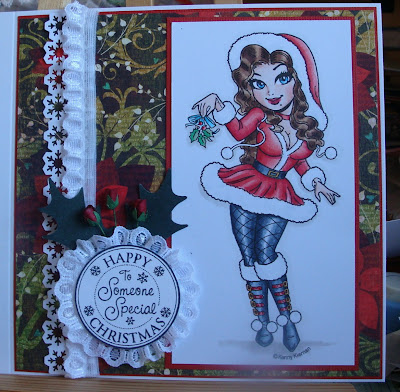 The papers are Jovial by Basic Grey, one of my fave ever pads. The sentiment is LOTV I cut the sentiment out and then edged it with some lace which was a gift from my kind blogging buddy Hazel - thanks babes its fab! Then because its so lovely I used it again down the edge of my punched border too.

Then I couldn't decide what embellishments to use..... 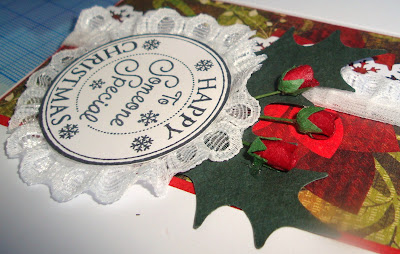 The arty shots for you fans ;)) 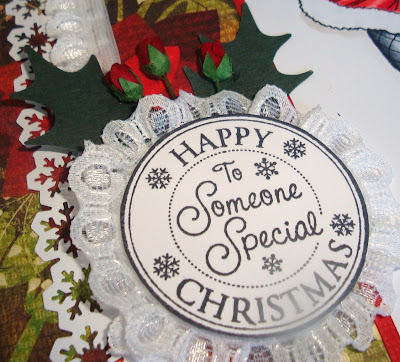 I still think she's missing something though... I might have to have a fiddle round with her later on!

So come and play with us peeps, the Gorjussettes have made some super cards to inspire you.

Oh and one last bit of advice look where you're going, especially if you should be in my garage!!!

Net you narna that will slow you down a bit now won't it. I hope you gave your OM an earful too!

Great card but I don't agree that she needs "fiddling" with she looks fine how she is.

Selective hearing at the wrong time from your OH there, I think! Hope the bruises aren't too sore. Fab card, the colouring looks great!

I don't think she needs anything else adding - perfect as it and love what you have done with the lace, particularly around the sentiment - I may have to borrow that idea ;o).

Oh dear Net, what are you like, more haste less hurry as they say! Or put your brush away when you have finished with it, more like it.

That is a bit of a minx on your card, I think you would have to be careful who you sent it to, with those come hither eyes lol!

Goodness Net what a disaster! Hope you're not too sore.

Great card, love how you've used the lace and that's one sassy Santa!

Oh this is so fabulous Net!
hugs
kim x