How you all doing? I hope no one has any or too much of that nasty white stuff, they do keep threatening us with more though!

I don't want any! Not even a flake :)) We had a smattering again last night but that's gone now thank goodness.

So anyway here's my card for this weeks Softpencil challenge. Is'nt this little pirate cute? Of course he has his parrot on his shoulder lol He's been coloured with Copics and I went over the pattern on his bandana with a white pen. The papers are Costco specials, punching a la Martha Stewart, paper raffia and a magnolia skull! I think the punch gives a sort of wave effect.... well that was the plan anyway. I hope you like him ;)) 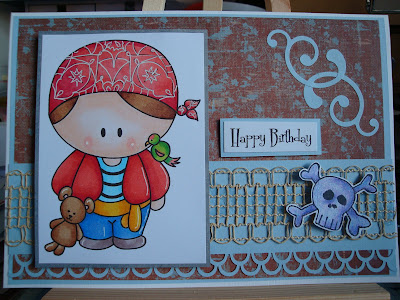 Now this is a sneak of WOYWW - you can just see my mess behind this box! I think it shows enough of my usual mess! It'll be tidy one day and you'll all faint..... Don't hold your breath waiting though.

Now as it was Valentines day I decided to make a box to pop the OM's present in, which was 2 CDS... so I made the box and it was about 1/2 an inch too narrow! How annoying was that? Yes VERY annoying is the answer. Anyway I'd got him some opera tickets so I put those in instead.

This is a one piece box - a pizza style box I suppose. Punched around with good old Marthas, the danger then is then when its been decorated that it becomes too girly for a man.... OK I know its bright pink! I like him to be in touch with his feminine side. Actually that would be hard - I don't think he has one.

Anyway I opted for some black raffia, an assortment of flowers from Wild Orchid crafts and a Magnolia heart stamp which was Copic'd. 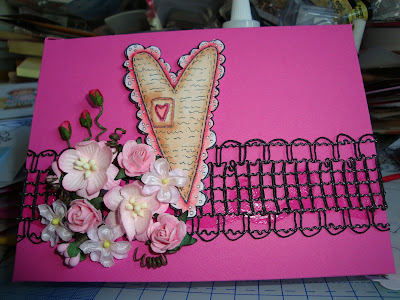 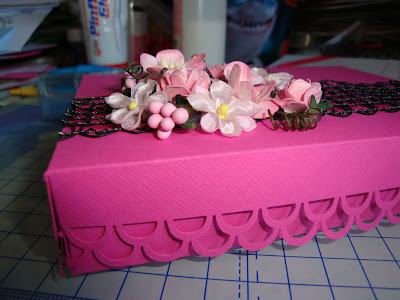 Pop over to Julia's and check out the other messes, er sorry desks!
Posted by Net at 18:11

I love the onik box. My OH is the same, totally hasn't got a feminine side. Probably can't een spell it! So come on...show the desk - you can't hide forever!

What a beautiful card and box,i love your images and colours.
So gorgeous papers.

wow - that box is great - and loving that lace stuff thats on the card and the box.

Wow stunning work! Love the boys card, so cute and that box and card are just simply gorgeous! Loving your new punch.
Pinky

OooOh Net your gift box is gorgeous. Please tell hubby when he's throwing it out to aim in my direction please. ;)

gorgeous cards and that box is scrummy :)

gorgeous cards and that box is scrummy :)

BEAUTIFUL!!! Love all the projects! WOW!

Great projects missus, but where have the brads gone?? You can't tell me you've used them all up already!!

I love that pink card with the heart, fabulous.

That Box is just Beautiful and love all the flowers and trim work
I see your desk a little you seem to be a crafter with the Push back method ... your really teasing the other girls with blurry backgrounds
hugs Nikki

Very cute pirate card, he is so adroable.

You did a gorgeous box and a so cute card Annette!!! I LOVE your coloring on the pirate! ;)

Thanks a lot to have been part of Softpencil DT!!!

Gorgeous projects! LOVE all the details and that beautiful raffia!