Well howdy y'all!
Have you missed me??? Had you even noticed I'd gone?...... Well I've been MOH, that's Missing On Holiday!
So that involved these two, Tinker at the front (nearer my fingers) and Harry looking for food going in their new travel cage. Its better than the old one but I have to say the 'parrot proof' door fastener is rubbish! Tinker had it open in about 2 seconds flat! Hence a cable tie holding it shut. Harry was actually a bit less car sick than usual, now whether this is because she can see more or she's getting better car legs... well who knows? 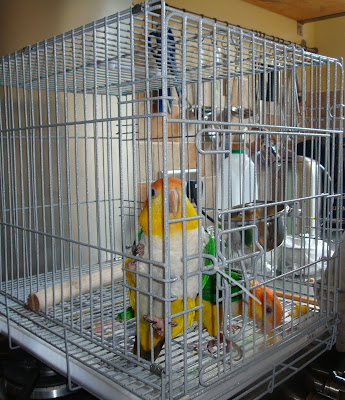 So we've been here! Yup lucky me has had another Florida trip. We started at Clearwater Beach, this was the view from our balcony - directly onto the beach. This is sunset the first night. Isn't it beautiful? As the sun drops lower and lower it seems to take ages. Once it gets to the horizon though it goes really fast. One minute its there and then its gone! Oh and the sea was beautifully warm too, none of that gasping in shock that we get here in the UK. Oh and its clean, as are the beaches. People just don't seem to dump their litter everywhere, they use the bins on the beaches. Perhaps something we ought to have don't you think? 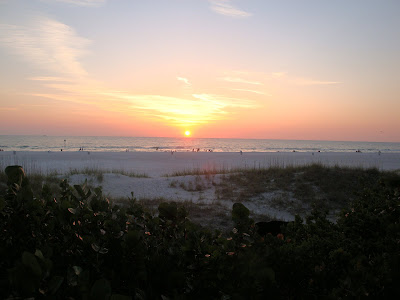 We also fed a few of these on the beaches too! Its amazing you wander down with your bread or whatever and there's not a bird in sight! Once you have one you soon have a load of them, they are so acrobatic. 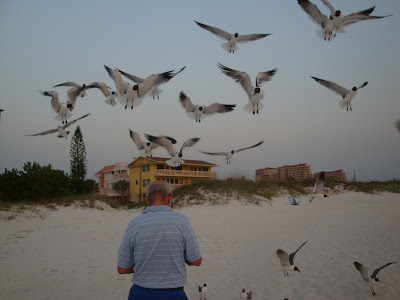 We also saw lots and lots of ospreys. There seemed to be a nest in every tree with chicks in. Now these are nesting on top of a floodlight on a soccer pitch. There used to be lots of these lights but they've been replaced with modern ones. They left this one though as the pair were showing signs of breeding so its had a reprieve for a few months till the chicks fledge. Obviously Florida (this part for sure) is ideal for Ospreys as there are so many lakes and fish to feed them all. We even saw them catching fish in the sea too. So the huge nest on top of the light! Oh they don't use this light when there's a nest on it, there would be a risk of fire and the chicks getting burnt too. I wondered how the chicks cope with heat, some days it was over 90f. 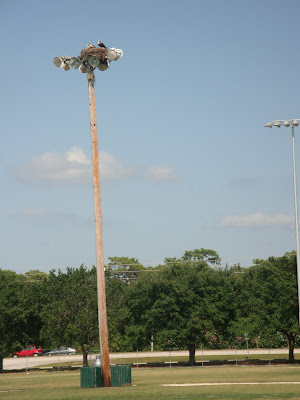 A bit of a closer view, as you can see there are two chicks and the mother in there. She was shouting her head off! I'm guessing to her mate to hurry up and bring them a fish! 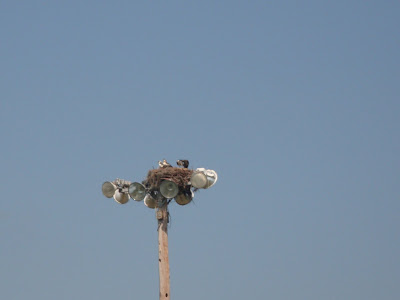 This is a nest in a tree on the golf course at Dunedin, as you can see its right over the path where all the golf buggies drive. The birds aren't fazed by these in the slightest though. There are chicks in this one too, they decided to duck down as I took the shot! In the space of a small area there were 3 nests so they obviously don't mind close neighbours. 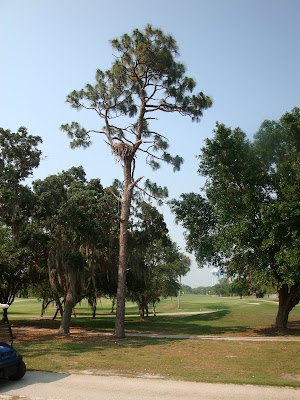 One of the neighbours nests! You can see they use rather big lumps of wood! Makes you wonder how they manage to make them really. I don't think I could using both hands, and they only do it with their beaks without any instructions either ;)) 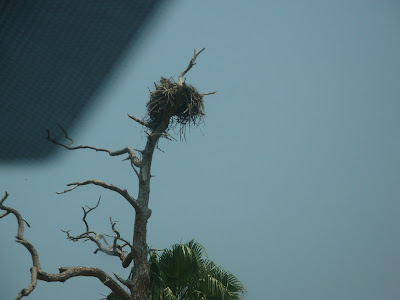 Now seeing as I've been in the Shopping, sorry Sunshine State I felt it necessary to indulge in a spot of retail therapy. Well it would have been rude not to. Oh I also bumped into the Lord of Inkiness too ;)) So here is a small view of the meagre amount of stuff I acquired..... 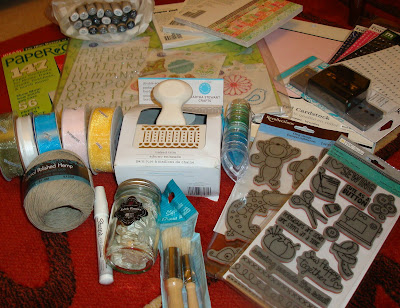 Now I'm sure some of you may have noticed my interest in fabric.... well I just so happened to find a haven for fabric strokers everywhere! Oh my I almost got thrown out when I screamed yippee and threw myself on the bolts of fabric... Luckily it would appear I'm not the first person to have done that! I've never ever seen so much fabric in my life! Now I got ~coughs~ one or two pieces.... but I could have filled 20 cases with it (funds and luggage allowance permitting). So I chose carefully(ish) and also bought a few patterns, magazines and 'stuff. 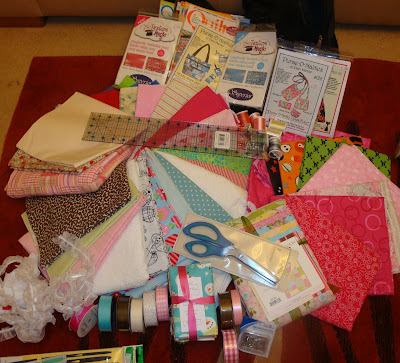 So see hardly anything really.... What I mean by that is 'hardly anything compared to what I saw and wanted as well but......' You know what I mean? Now of course I will have to brace myself to actually cut it! But for now I'm more than happy stroking and wrapping myself in it!
Posted by Net at 15:59

Oh my! A LITTLE bit of stash then!

It certainly looks a lovely place, Net. I am sure you enjoyed it all!
Kath

Fab haul there Net! Looking forward to seeing your projects. I see that the sewing craze has even affected your stamp buying habits, serious stuff. Hope the birdies settle down soon and stop biting you.

ooooooo lots of lovely bits and pieces there Net - well done on shopping and managing to get it home!!
If by any chance your fingers get bitten off can I have your fabric please!!!!!!

Wow Net you didn't buy much did you lol?? Looks and sounds like you had a lovely holiday.

Talking of Ospreys I read that the 1st Osprey chick had hatched at Boat of Garten in North Scotland. You can see them at http://www.rspb.org.uk/reserves/guide/l/lochgarten/abernethyvideo.aspx
I've just had a look a minute ago. amazing. There's also more at the Loch of the Lowes at Dunkeld in Perthshire.

Evening Net - glad you had a lovely holiday and you did well on the shopping too.

More pens and a punch! and so much fabric. :)

Oh how wonderful to be seeing those birds on your travels. Thanks so much for sharing and as for your stash. You are going to have so much fun crafting, absolutely wonderful!
hugs
kim x

Really enjoyed reading about your hols and seeing all your pics, totally jealous of your shopping (but what crafter wouldn't be) Thanks for sharing!

its realy nice and cool blog i view post and its realy informatic i bookmark your blog keep it up!
free sms appand i saw many useful tips in your blog good job
the world secrets