Howdy there Bloggettes, yup the time thieves have struck again! I mean where did they come from? I think the same guys also stole the sun too. The weather has been pretty rubbish here. I mean its the end of May and we still have the heating on! But I can't bear being cold..... please come back sunshine!
Now we've had a bit of a mystery, well kind of, over a dove cooing outside the bedroom window at 4.30am most mornings! The OM of course has no knowledge of this whatsoever - the upside of being a bit deaf eh? Well the other day I saw a dove almost fly into the bedroom window with a twig in its beak.... So I went outside for a look. Guess what I saw?
Yup the little dove has made herself a nest on the bracket of the security light! You can see how close to the barge board she is - not much room is there? 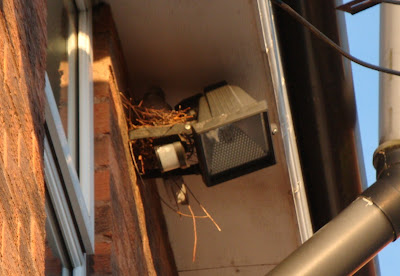 In fact so little room there's a good deal of overhang in the tail department! 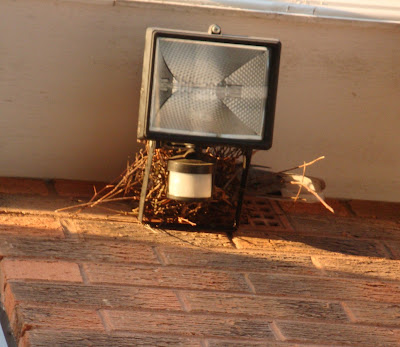 But she does look nicely settled doesn't she? On the plus side of course there's as much food as she can eat in the garden. We've got a newly fledged baby dove in the garden, I wonder if its the first one out of this particular nest? I've no idea how long she's been there. On the plus side I suppose there's no one else trying get up there with her, the wind won't blow it and she'll be dry when it rains! 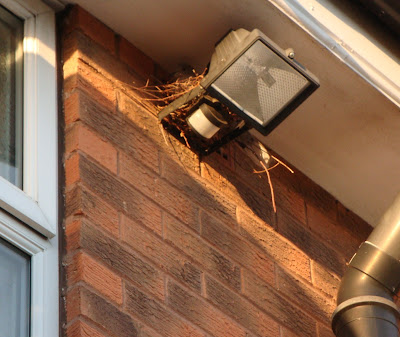 Now over at Totally Gorjuss we have another challenge up and running. This time its 'strings the thing' which basically means put some string on your card in one way or another - easy as always ;)) Now I had the idea for the card but then decided that I didn't want to just wrap it around the card kind of thing...... but what to do with it? Now while I was away I saw some flat coils of string so I had a go at those. I think its quite a good manly embellishment. 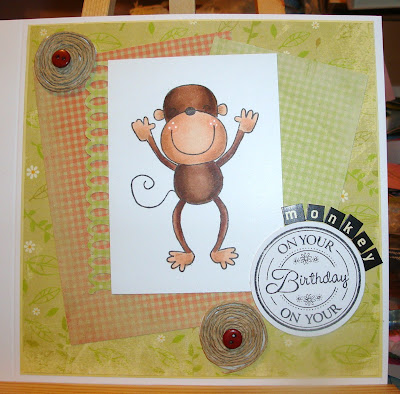 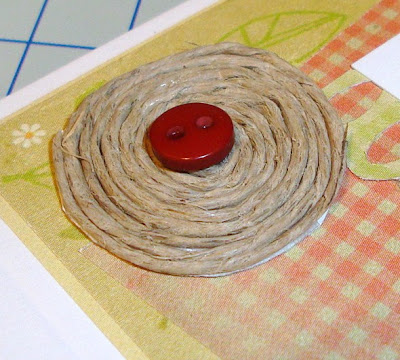 Now I'm sure you've heard me mention the girls.... if not where have you been! Now me being a cruel Mummy I like them to earn their keep!
We had Tinker on cutlery duty the other day.....
I'm not quite sure she got the hang of it somehow.....

oo string - I have some of that so might have a think and play this week :)

bless the dove-i hope the nest holds up long enough:)
love the string swirls too :)

haha I love the way Tinker stopped to listen to the voices...she probably realises that she is already the boss!!!!

Awe just look at that dove! I am amazed that there is room for her & an egg or two. Brilliant phot's Net.