Oh heck!
Yup tis only me, the victim of more time theft! Oh and also wondering where on earth Little Mojo has gone to! If anyone know the whereabouts of a scruffy scrappy looking thing that's Little Mojo, please give him a poke in the ribs and send him back here please!
So anyway whether he was here or not I had to make something for the latest challenge over at Totally Gorjuss This week is a sketch kindly sponsored by Joanna Sheen 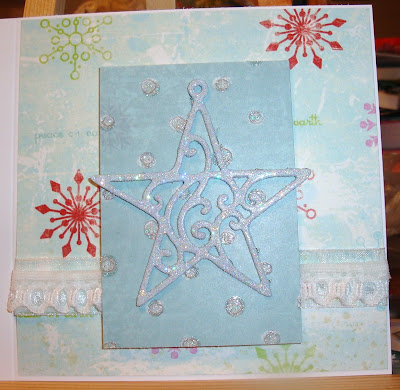 My card this week is incredibly simple! Oh and it was quick too ;)) There's a C word event looming so I know quick cards will be very useful ;)) Certainly in my world at any rate! So the paper is all from last years Papermania Christmas collection, ribbon from stash and a Marianne star die which has been glamour dusted. 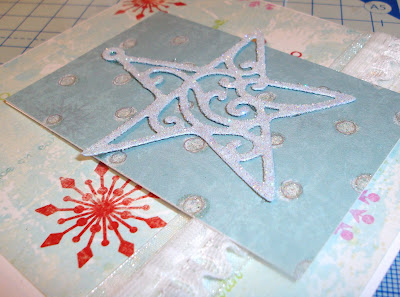 I think it took me longer to glitter the die than it did to actually make the rest of the card! I think it kind of works though....
Now I went on a bit of a jaunt this weekend. My first ever quilt show. It was the Great Northern quilt Show at Harrogate. So it would have been rude not to go wouldn't it?
Not only were there copious amounts of stash for sale.... more of that later ;) There were some fantastic quilts on display. My only gripe being that the lighting could have been better. Some of them were just awesome!
This one in particular caught my eye - its done on leather! 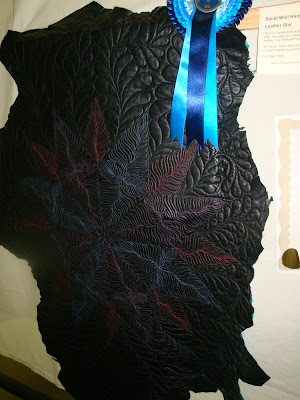 Where it was displayed didn't show the lovely colours that the maker used. However the flash picked them up nicely.

Now stash.... There were several stalls who were selling fabric at £4.00 per metre! What a bargain... I think it only fair to indulge when people have been so kind as to sell it at that price! 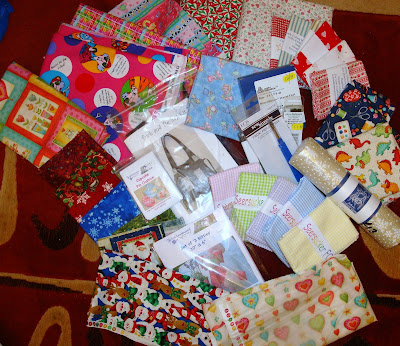 The glittery star looks fab on the card! Love the quilting on the leather and look forward to seeing what you make with the new fabric stash!

Lots of stash there - happy quilting! Fab card - love the star (would be just right for my CHNC challenge this week) x

Great Christmas card. Quick and gorgeous what more could you want?

Looks like you bought one or two bits and pieces at the quilt show lol!!

oo Net you did buy some lovely fabric and that pattern for kitties looks interesting - I'll be nosing to see those made up. :)

High Heel Sneakers beauty depends on, can immediately tall and straight body, an elongated leg lines, from the vision of more slender figure, make the body curve of ups.Wearing high heels is not flat and comfortable, but as long as the selection of shoes, in fact did not imagine so uncomfortable Cheap High Heels, not to mention the little pain, than it can bring the benefits of Christian Louboutin Long Boots, then what?

Why does the Woman High Heels? No reason.

It seems the gossip nature are all in the same boat, trained foreign journalists more not easily let go of these star forget tear Cheap Air Jordan 2011 trademark such small details!According to "Daily Mail" report, in recent days around the world for its new transitions High Heels For Women, "Bad Lieutenant" to promote the sexy actress Eva Mendes, the day before yesterday came to the SVA theater in Dunks Heels, wearing a low-cut white shirt and a black corset dress and a high-heeled shoes, office secretary modeling she looks charming Cheap Air Jordans.

However, she might put attention on the research how to appear more sexy, please see below this one about her beautiful high-heeled shoes details: she seems to ignore the feet wore Suede Heels - she seemed to forget the heels soles are affixed trademark tearing down Womens High Heels.!